Humiliation during trial-and-error learning can be permanently demotivating.  If you are humiliated during an early attempt at public speaking, you may never try again.

Blushing encourages others not to laugh at you.  Your blushing triggers compassion in others, which they stop by not laughing at you.

Blushing is triggered when humiliation stops pride.  You will blush if you enter a party and everyone looks at your face and then at your crotch, where you notice a stain for the first time.  Their attention triggers your pride.  The stain triggers your humiliation.

Humiliation stopping pride is a proxy for failure during trial-and-error learning.  The rank spike required to produce this combination rarely occurs in other circumstances.

Blushing is more frequently triggered in children.  Children are more likely to experience the rank spikes associated with trial-and-error learning.

Blushing is more frequently triggered in young women.  Infatuation makes women more prone to feel rank spikes.  Everyone feels pride when a higher-ranking individual treats them like an equal.  Young women also feel strong infatuation when a higher-ranking man courts them.  The combination of strong pride and strong infatuation makes young women stumble conversationally.  Their stumbling triggers their humiliation and stops their pride. 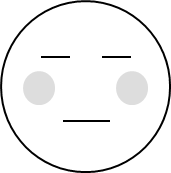 Blushing is autonomic because it triggers compassion.  If blushing could be voluntarily triggered, it would be used fraudulently.  People would just blush whenever they made a rank-reducing mistake, instead of taking steps to avoid making the mistake.
go to next chapter
back to Home
Happiness Dissected  is a more practical version of The Origin of Emotions.