Chapter 60
Best For The Species 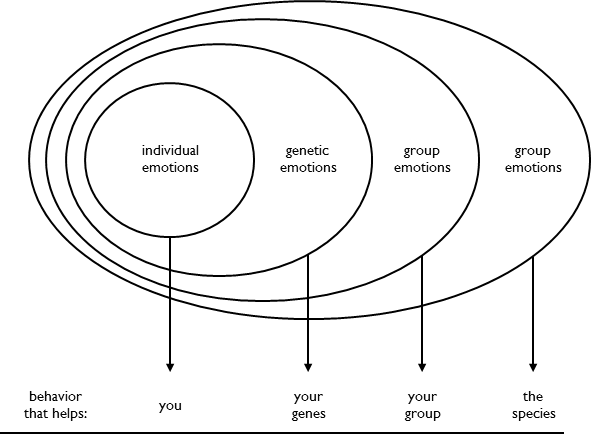 When you maximize your happiness, you do what is best for the species.

Individual emotions encourage behaviors that help you.  Those behaviors also help your genes, your group and the species.  Eating is an example.

Group emotions encourage behaviors that harm you and your genes to help your group.  Those behaviors also help the species.  Increasing your rank is an example.

Group emotions can also encourage behaviors that harm a group to help the species.  The race to the moon was an example.  The Soviets wanted to feel pride.  The Americans wanted to avoid humiliation.  Both countries invested enormous resources that could have been used to save the lives of many citizens.  Neither country gained advantage over other countries that did not join the lunar club.  However, all countries did gain from the accelerated development of aerospace technology.  We can now divert asteroids away from earth.  It would have been better for the Soviets and Americans to wait for others to make the enormous investment, like the Chinese did.

When you do what is best for the species, you do what maximizes species headcount.
go to next chapter
back to Home
Happiness Dissected  is a more practical version of The Origin of Emotions.