Your rank reflects your contribution to group happiness.  Your rank increases when you are expected to contribute more to your group’s happiness.  The unemployed increase their rank when they become employed.

Contributing more to group happiness helps group survival.  The fewer unemployed there are, the more efficient a nation is.

Rank is usually assigned with money.  The more you contribute to group happiness, the more you are paid.

Rank is also assigned with titles, perquisites and trophies.  High-ranking people are introduced as the honorable or chief executive.  They are given large offices and parking spots near the door.  They receive gold medals and statuettes.

Rank and pecking order are different.

Rank harms individuals by increasing competition.  Increasing your rank requires contributing more to group happiness than others.  The more you contribute to your group’s happiness, the more you harm yourself.

The harm caused by increasing rank can be seen in the early deaths of early leaders.  Analysis of 1672 US governors by Stewart McCann showed that the younger a governor was when first elected, the sooner he died.  The results are summarized in Younger Achievement Age Predicts Shorter Life for Governors: Testing the Precocity-Longevity Hypothesis with Artifact Controls.  As reported in The New York Times Magazine – The 3rd Annual Year in Ideas: Young Success Means Early Death, the analysis produced the same result for Academy Award winners, Nobel laureates, prime ministers, presidents and pontiffs. 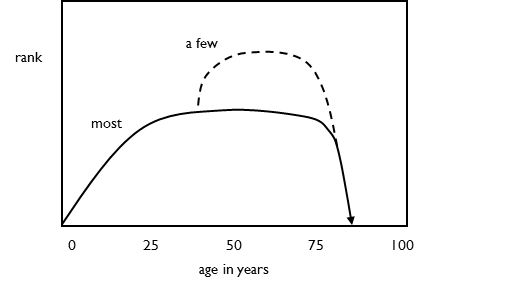 Rank is increased by learning or innovating.

Learning increases rank throughout childhood.  During the first 20 years of life, your rank keeps increasing as you graduate to the next grade or school.  Your rank continues to increase during the next 5 to 10 years of work as you learn new skills.

For most adults, rank plateaus in their thirties and remains unchanged until their seventies, when it declines with health.

For a few adults, innovating increases their rank.  Dr. Steven Trokel was not content to run a successful ophthalmology practice in New York City.  He went on to develop and patent the use of the Excimer laser for corrective eye surgery in 1992.

People usually regret not recognizing the importance of rank early in life.  If they did, they would have invested more to increase their rank.  Instead, many people push their children to avoid making the same mistake.

Conceptual Trigger
Pride is usually triggered when you:

By definition, pride is temporary.  Pride is only triggered while you conclude that your rank is higher.  Eventually, your higher rank is not higher anymore.  A new car triggers pride for less than a year.

Pride is not triggered by slower growth.  You will not feel pride if you receive a 5% salary increase and others receive a 10% salary increase.  Pride only rewards improvements in relative contribution, which requires learning or innovation.

Underdogs always feel pride when they win.  Underdogs are not expected to win.  Winning increases their rank. 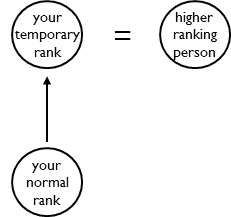 Being complimented triggers pride.  You feel pride the first few times someone says you are attractive or intelligent.  Eventually, compliments from that person do not increase your rank further and therefore stop triggering pride.

Video games have many levels to trigger continuous pride.  Each time a player reaches a new level or rank, they feel a burst of pride.  Higher rank is recognized with audio/visual effects and awards, such as new weapons or privileges.  Gamers become addicted to those bursts of pride, like drug users to heroin or gamblers to slot machines.

People seek challenges to trigger pride.  A challenge is something which is a stretch for someone, meaning it requires increasing their rank.  People usually seek alternative challenges when their career rank plateaus in their thirties.  They start to collect things, run marathons or become politically active.

A sense of accomplishment is pride.  If you had a particularly good week at work, you believe that your rank has increased.

Rich children rarely feel pride.  Rich children are born high rank and usually stay that way until their seventies.  Because they start high rank, they rarely increase their rank.  Their inability to feel pride makes them more dysfunctional than average.

A rags-to-riches story is the best life plan.  A continuous climb triggers continuous pride.  Continuously increasing your rank for a lifetime requires starting at the bottom.  If you start higher than the bottom, your rank will hit a plateau before death.

People trigger imagined pride to achieve rank increases that require long-term investment.  To remain motivated through a project which only increases rank after many years, people often imagine the pride they will feel when the project is completed.  To stay motivated while writing this book, I frequently imagined the pride I would feel when it was completed.

Pride varies with the rank increase.  The larger the increase, the stronger the positive effect.  Winning a million dollars triggers more pride in a beggar than a billionaire.

Pride varies with the rank increase to focus you where you can best contribute to group happiness.  You pursue the career path that offers the greatest potential to increase your rank and therefore group happiness.  Most lawyers become lawyers for the potential increase in rank, not to be stuck inside office buildings for long hours.

All four rank conceptions are stronger in men:  pride, humiliation, humor and envy.

Women cooperate more than men because their rank emotions are weaker.  They are better team players because they seek pride and humor less than men.  They enjoy the spotlight and humiliating others less than men.  Women also seek humiliation and envy less.  They are less likely to be offended by others or by unequal treatment.

Men compete more than women because their rank emotions are stronger.

All four rank emotions seem to grow stronger with age.  They seem to play a more dominant role in your thoughts as you age.  However, the strength of their mental effects does not change as you age.  What changes is your awareness of their importance to your happiness.

Winning a jackpot gives winners a large and sudden increase in rank.  The probability of winning a jackpot is close to 0% moments before it happens.  Winning causes the probability to instantly hit 100% and the gambler’s rank to skyrocket.  As their rank skyrockets, gamblers feel very strong pride for a short time.

Other Species
Rhesus monkeys feel pride.  A study was conducted in which rhesus monkeys were paid cherry juice to view pictures of other monkeys.  They were willing to be paid less juice to view higher-ranking monkeys.  Viewing higher-ranking monkeys triggered their pride, just like being treated as an equal by a higher-ranking individual triggers pride in humans.  The study, Monkey Pay Per View: Adaptive Valuation of Social Images by Rhesus Macaques, was conducted at Duke University by Robert Deaner.
go to next chapter
back to Home
Happiness Dissected  is a more practical version of The Origin of Emotions.