Your rank falls when you are expected to contribute less to group happiness.  The employed fail to maintain their rank when they become unemployed.

Contributing less to group happiness harms group survival.  The more unemployed there are, the less efficient a nation is.

Rank is most likely to fall when rank plateaus and pride stops.  Most people hit a rank plateau in their thirties.  The continuous pride they felt throughout childhood stops.  This is when people experience a mid-life crisis, meaning they think about letting their rank fall.  Without the reward of pride, they are less willing to work long hours.

Humiliation maintains rank when pride stops.  After hitting a plateau, people maintain their rank to avoid humiliation.  They cannot imagine moving to a smaller house or wearing cheaper clothes.  They decide that feeling humiliation is worse than working long hours without feeling pride.  They give up on weekdays and live for weeknights, weekends and vacations.

Without humiliation, people would roller-coaster on pride.  Without a penalty to letting your rank fall, people would repeatedly let their rank drop to the bottom and then raise it back to its peak.  Their nearly continuous increase in rank would trigger nearly continuous pride.  CEO’s would become alcoholics and then rise up to be CEO’s again.  Humiliation stops roller-coastering by penalizing the drops.

Rank also falls when innovation is not adopted.  If you fail to adopt innovations like cell phones, your group contribution remains unchanged while others increase theirs.

Humiliation ensures the adoption of innovation.  Most adults buying their first cell phone today are primarily doing so to avoid humiliation.

By definition, humiliation is temporary.  Humiliation is only triggered while you conclude that your rank is lower.  Eventually, your lower rank is not lower anymore.  A scratch on your car is embarrassing, but the embarrassment subsides after a few months.

Favorites always feel humiliation when they lose.  Favorites are expected to win.  Losing lowers their rank.

Favorites also feel humiliation if they win, but fail to beat the spread.  Favorites are expected to win by the spread.  Winning by less than the spread lowers their rank. 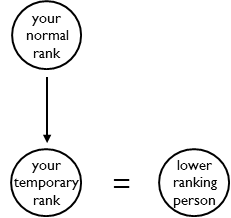 Being putdown triggers humiliation.  You feel humiliation the first few times someone says you are unattractive or unintelligent.  Eventually, putdowns from that person do not decrease your rank further and therefore stop triggering humiliation.

Being the victim of a prank triggers humiliation.  A prank cannot trigger humor in others unless it lowers someone’s rank.

Not hearing others say please and thank-you triggers humiliation.

If someone says please and thank-you to you, they are implying that you are equal-or-higher rank than they are.  They do not expect you to cooperate with their request unless they promise reciprocity.

If someone does not say please and thank-you, they are implying that you are their servant.  They expect you to cooperate with their request without a promise of reciprocity.  If you thought you were equally-ranked, implying that you are a servant lowers your rank and triggers your humiliation.

Humiliation is triggered more frequently in an insecure person.  Insecure people are frequently looking for evidence that others think they are lower rank.  They frequently ask friends if their appearance or manner is embarrassing.

Child stars have the worst life plan.  Child stars feel very strong pride as their rank rockets to the top.  However, they usually spend the remainder of their lives continuously declining in rank.  Their continuous decline in rank triggers continuous humiliation, which they often try to avoid with drugs or alcohol.

Humiliation varies with the rank decrease.  The larger the decrease, the stronger the negative effect.  Being fired triggers stronger humiliation than being criticized.

Humiliation varies with the rank decrease to mitigate losses to group happiness.  To reduce the strength of humiliation, people will minimize their loss of rank.  Professionals who lose their jobs will take a blue-collar job to avoid accepting welfare.

Humiliation is generally stronger in men.  For the same decrease in rank, men feel a stronger negative effect than women.  Men are more likely to commit suicide after losing a job or losing face.

The more public an apology, the stronger the humiliation.  The more people know that you are a rule breaker, the further your rank falls.  Successful libel plaintiffs often seek retribution by requesting a public apology from the defendant.  The plaintiffs often request prominent placement of the apology in large daily newspapers to ensure maximum exposure.

“ The desire of acquiring the comforts of the world haunts the imagination of the poor, and the dread of losing them that of the rich."       Alexis de Tocqueville

Most students chose scenario A, even though it pays them half as much as B.  Students preferred A because it triggered their pride, while B triggered their humiliation.  The survey, Is More Always Better?: A Survey on Positional Concerns (Journal of Economic Behavior and Organization) was conducted by Sara Solnick And David Hemenway.


Other Species
Rhesus monkeys feel humiliation.  In the Monkey Pay Per View study referred to in the previous chapter, monkeys had to be paid more cherry juice to view pictures of lower-ranking monkeys.  Viewing lower-ranking monkeys triggered their humiliation, just like being treated as an equal by a lower-ranking individual triggers humiliation in humans.
go to next chapter
back to Home
Happiness Dissected  is a more practical version of The Origin of Emotions.