Sensory Triggers
Visual cute is triggered by the sight of:

Audible affection is triggered by the sound of a voice with very high pitch and resonance.

Cute is mistakenly triggered by non-kin. You feel cute when you see infants who belong to co-workers or strangers.

Cute is mistakenly triggered by non-human infants, like puppies or kittens.

Cute is mistakenly triggered by scaled-down objects, like the Mini Cooper or Legoland. 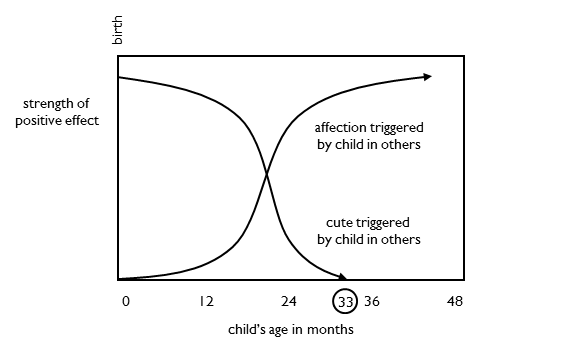 Cute varies with a child’s age.  The younger the child, the stronger the effect it triggers in others.  Newborns trigger the strongest cute.  Children that are 33 months or older do not trigger cute.  Children stop triggering cute when they can trigger strong affection in others.

The end of cute is the third of four reasons for the terrible-two’s.
go to Next Chapter
back to Contents

For a more practical version of this book, visit:  Happiness Dissected
The Origin of Emotions © 2021 Mark Devon
www.theoriginofemotions.com