People Affected:  men during the 42 months of monogynic love
Type of Emotion:  conceptual punishment
Conceptual Trigger:  “ the woman I love is dead ”
Mental Effect:  negative
Key Feature:  not triggered if monogynic love is no longer active
Key Feature:  the longer love had been activated, the stronger the effect
Involuntary Expression:  prolonged frowning
Synonym:  sorrow
Purpose
Monogynic grief encourages men to protect the mother of their children.

Conceptual Trigger
Monogynic grief is not triggered if monogynic love is no longer active.  If a man fell in love with a woman more than 42 months ago, he will not feel grief if she dies.  Men maximize their reproduction by moving onto a new woman after 42 months.  Consequently, they are not punished for the death of a woman they should have left.

Monogynic grief is triggered even if the dead woman was childless.  Ideally, men would not be punished for the death of a childless woman.  However, men cannot detect pregnancy before monogynic love is activated.

Monogynic grief is triggered by a woman’s death, whether the man could have prevented it or not.  This encourages men to treat all death as preventable. 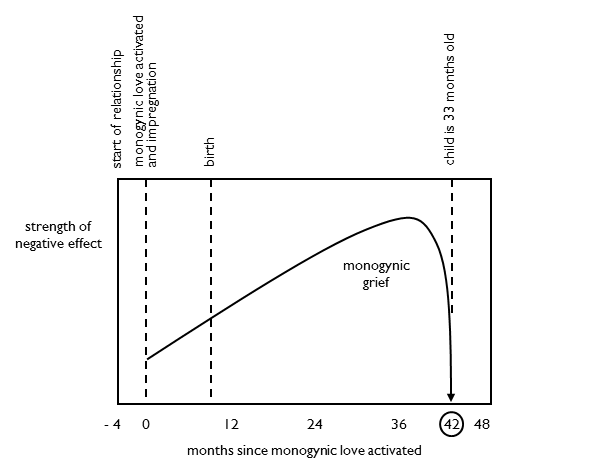 Other Species
Other species feel monogynic love and monogynic grief.  Marmoset monkeys, wolves and sand grouse are species where fathers help mothers with the feeding and protection of offspring.

Some species just feel paternal grief.  Jacana, Darwin’s frog and catfish are species where mothers leave fathers to protect, but not feed offspring.
go to next chapter
back To Home
Happiness Dissected  is a more practical version of The Origin of Emotions.