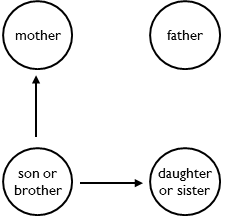 Repugnance is triggered when men feel sexual pleasure triggered by women they lived with prior to age 6 years.  Simply put, men feel repugnance when they imagine their mother or sister naked.

Prior to age 6 is a proxy for kin.  Prior to age 6, boys primarily interact with siblings.  After age 6, they begin interacting with non-siblings.  Schooling usually starts at age 6.

Repugnance is not triggered in fathers.  Daughters are not alive when fathers were 0-6 years old.

Repugnance is not triggered in brothers that are 6 or more years older.  Younger sisters were not alive when older brothers were 0-6 years old.

For a more practical version of this book, visit:  Happiness Dissected
The Origin of Emotions © 2021 Mark Devon
www.theoriginofemotions.com