People Affected:  women feeling infatuation
Type of Emotion:  conceptual punishment
Conceptual Trigger:  “ the man I am infatuated with wants to make another woman happy ”
Mental Effect:  negative
Key Feature:  the stronger the infatuation, the stronger the effect
Purpose
Heartbreak encourages women to avoid lotharios.  Lotharios are men who pretend to fall in love to have sex.  Afterwards, they leave women to raise children without paternal support, a worst case scenario for a woman’s genes.

Male heartbreak did not evolve.  Female lotharios do not exist.  Maternal love ensures that mothers care for a man’s child.

Men may stop feeling love or start feeling jealousy or loneliness if a woman leaves.  These reductions in happiness are mistakenly believed to be male heartbreak.

Men will stop feeling monogynic love if they were still in love when a woman leaves.  Without contact with the woman, a man cannot conclude that she is happy.

Men feel jealousy if they were in love and the woman leaves for another man.

Men feel loneliness if the woman was an important source of affection before she left.

Conceptual Trigger
Heartbreak is only triggered if a woman is still infatuated with a man.  If a woman started feeling infatuation more than 8 months ago, she will not feel heartbreak if her man courts another woman.  If she has not activated his monogynic love after 8 months, she probably never will and should move on to a new man.  Consequently, women are not punished for losing a man they should have left. 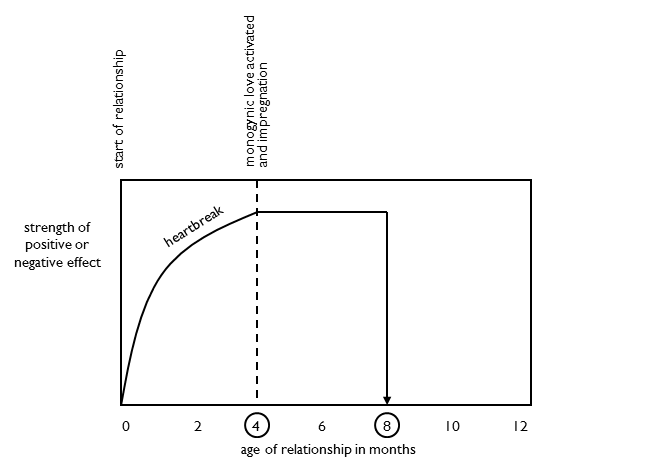 Heartbreak varies with the risk of pregnancy, which is greatest during the 4 months that vaginal pleasure is elevated.
go to next chapter
back To Home
Happiness Dissected  is a more practical version of The Origin of Emotions.