Female jealousy did not evolve.  Male infidelity cannot cause a woman to mistakenly invest in another woman’s child.  Princess Diana knew that her sons were hers.  Prince Charles does not.

Women can feel humiliation, heartbreak and revenge if a man commits infidelity.  These negative effects are mistakenly believed to be female jealousy.

Women feel humiliation if infidelity lowers their rank.  If a woman is the last to know about her man’s infidelity, it lowers her rank.

Women also feel revenge when humiliated or heartbroken.  A woman’s revenge is stopped by harming the man as much as she was harmed by humiliation or heartbreak.

Conceptual Trigger
Jealousy can be triggered by any sexual pleasure, not just penile.  Jealousy is triggered when another man enjoys visual pleasure while looking at a woman.  This encourages men to punish the earliest stages of courtship.  Punishing early courtship prevents escalation to sex.  Punishing penile pleasure would be too late.

Jealousy is only triggered when monogynic love is active.  If a man fell in love more than 42 months ago, he will not feel jealousy if his woman flirts with another man.  After 42 months, a man should be on a new reproductive cycle with a new woman.

Women often trigger jealousy to verify monogynic love.  Women intuitively know that a jealous man is a man in love.  A woman will flirt with other men just to see if it triggers jealousy in her man.  If it does, he must be in love. 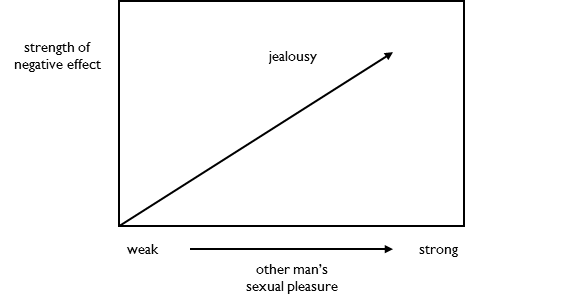 While the strength of jealousy determines the likelihood of punishment, the wording of its conceptual stop determines how much a man punishes a woman. 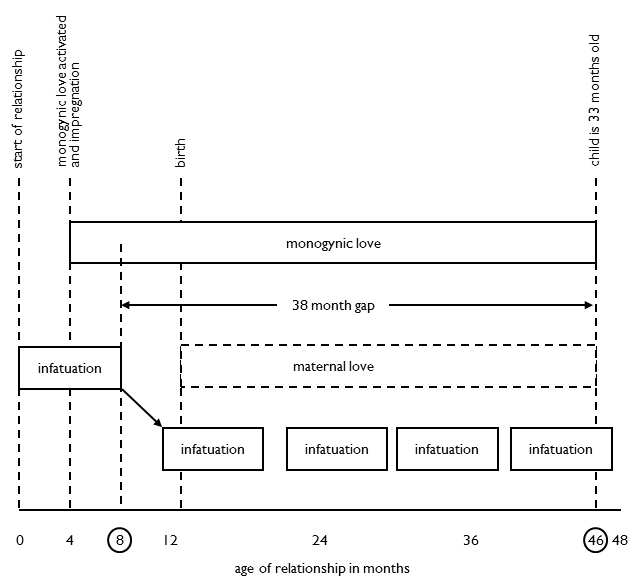 Jealousy is frequently triggered during the 38 month gap of childless relationships.  Since women do not feel maternal love, they seek new men to trigger their infatuation.  While women may not have sex with other men during this period, they will enjoy flirtation with other men, which triggers jealousy in the man that loves them.

Jealousy and envy are not synonyms.

Jealousy can only affect men in love.  Envy can affect everyone.

Jealousy and envy are both negative mental effects.

Jealousy is stopped by punishing a philandering woman.  Envy does not have a conceptual stop.  Envy only stops when the conceptual trigger is no longer true.  Either your rank rises to your peer’s level or your peer’s rank falls back to your level.
go to next chapter
back To Home
Happiness Dissected  is a more practical version of The Origin of Emotions.