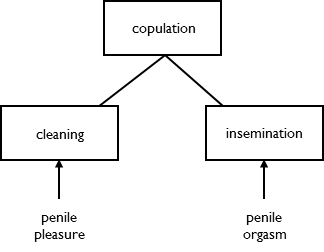 Multi-male mating does not explain extended human cleaning.  Chimpanzees only clean for 10 seconds, despite using multi-male mating far more than humans do and they have the testicles to prove it.  Relative to their body weight, chimpanzee testicles are 4 times heavier than human testicles.

Our aquatic detour explains our extended cleaning.  During our aquatic detour, we lived and mated in the water.  Cleaning would have removed marine deposits already present in the vagina or pushed into the vagina during initial penetration.

The baculum and hymen are further reproductive evidence of our aquatic detour.  Among our closest primate relatives, only humans are missing a baculum and only humans have a hymen.  Human males lost their baculum, which is a penis bone, because waves broke it during mating.  Human females gained a hymen to prevent marine pathogens from entering the vagina during childhood.

The penis is shaped to help with cleaning and insemination.  The bulbous head of the penis acts like a bi-directional flange as it rides over deposits during vaginal penetration and then bends back to scoop deposits out when the penis withdraws.  When the head is fully erect, as it is during orgasm, it pushes deposits forward and scoops nothing out when it withdraws.  Most primates, including chimpanzees, did not evolve a bulbous head or true glans penis.

Sensory Trigger
Penile pleasure is triggered by copulation or contact that replicates it.

Penile pleasure grows stronger with sustained copulation or cleaning.  This encourages men to penetrate and withdraw once a second for a minimum of 120 seconds.  This frequency and duration ensures the removal of pre-existing vaginal deposits.

After penile orgasm, penile pleasure temporarily becomes a weak negative effect.  This discourages men from cleaning their own seminal deposit.
go to next chapter
back to Home
Happiness Dissected  is a more practical version of The Origin of Emotions.