Momentary smiling is more frequently triggered in women.  Affection and cute are generally stronger in women. 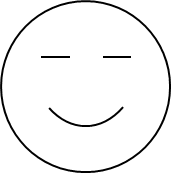 Smiling is pulling the corners of the mouth up.  Smiling is also the slight raising of the upper eyelids to enlarge the eyes.

Smiling triggers affection in others.  You feel affection when you look at smiley above.

Voluntary smiling does not raise the upper eyelid.  You can detect this subtle difference.  You know that a salesman’s voluntary smile is not authentic.  His eyes are not “bright and sparkling”.  This subtle difference was first noticed by Duchene and reported by Charles Darwin in The Expression of the Emotions in Man and Animals.

Other Species
Only humans smile.

Cooperative carnivores use vocal or body expressions to reinforce kinship.  Cats purr.  Wolves howl.  Dogs wag their tails.  Unlike facial expressions, these expressions do not require line-of-sight and close proximity.
go to next chapter
back to Home
Happiness Dissected  is a more practical version of The Origin of Emotions.