Monogynic love encourages social, not sexual monogyny.  While monogynic love does encourage men to support one woman, it does not discourage men from having sex with other women.  Male infidelity does not jeopardize maternal post-natal care.  Maternal love ensures that mothers will care for a man’s children. 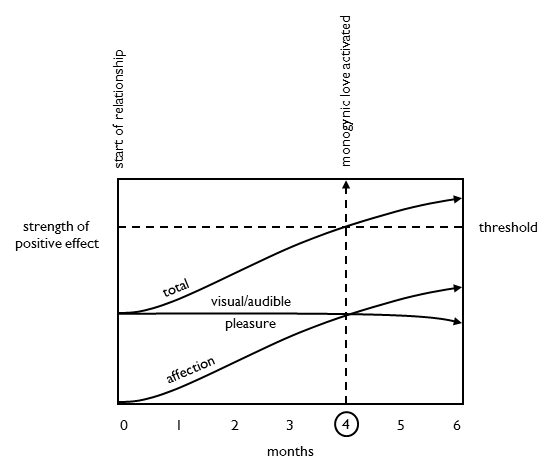 Requiring suddenly strong affection ensures sexual exclusivity during courtship.  To trigger strong affection in 4 months, a woman must spend most of her free time with a man.  During this time, she would not have time to court another man.

Activation does not require copulation or pregnancy.  Ideally, men would not fall in love until they copulated with and impregnated a woman.  However, men cannot detect pregnancy until month 4 and monogynic love needs to be activated at impregnation.

Monogynic love cannot be activated by more than one woman at a time.  This ensures that men focus their post-natal support on one woman.

Monogynic love is disproportionately activated by women that look maternal.  The more a woman looks like a man’s mother, the stronger the affection she triggers in him.  The stronger the affection a woman triggers in a man, the sooner she reaches his activation threshold.  Simply put, men tend to fall in love with women with the same eye color, hair color, skin color and facial bone structure as their mothers.  This encourages mating with compatible genes.

With birth control, making a woman happy does not make a man’s child happy.  For childless women, maternal love is not the primary source of happiness.  Instead, pride usually is.  Pride is triggered by increased rank and diamond rings are a good way to increase rank.  Diamond rings sales accelerated after the advent of the birth control pill in 1961.

Monogynic love is triggered regardless of who makes a woman happy.  Men feel love when their children make their woman happy, which avoids men competing with children for a mother’s attention.

Monogynic love varies with a woman’s happiness.  The happier a woman is, the stronger the positive effect.  Men feel stronger love when they see their women smile. 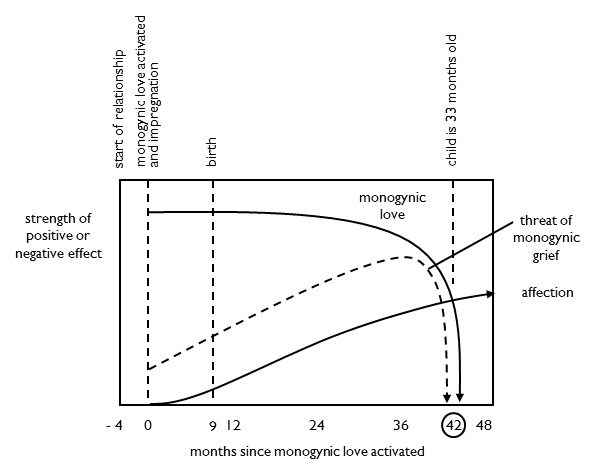 The threat of monogynic grief also has a duration of 42 months.

Affection usually continues after monogynic love ends.
go to next chapter
back To Home
Happiness Dissected  is a more practical version of The Origin of Emotions.