People Affected:  everyone older than 24 months
Type of Emotion:  conceptual reward
Conceptual Trigger:  “ I learned that X made a rank-reducing mistake that I could have made ”
Mental Effect:  positive
Key Feature:  the more likely the mistake, the stronger the effect
Key Feature:  effect generally stronger in men
Voluntary Expression:  laughter
Synonyms:  funny, schadenfreude
Purpose
Humor encourages everyone to learn about rank-reducing mistakes that others make.

Reducing rank-reducing mistakes helps group survival.  The fewer alcoholics there are, the more efficient a nation is.

Humor is only triggered the first time you learn about a mistake.  Jokes are not funny the second time you hear them.  Humor only rewards you for learning something new.

Punch lines are funny because they provide an unexpected reduction in rank.  ~  Some sad news, President Bush's lapdog passed away.  Gee, I didn't even know Tony Blair was sick.

Self-effacing humor reduces the comedian’s rank.  The Three Stooges and Rodney Dangerfield were funny because they lowered their own rank.  ~   As a child, I got no respect.  When I played in the sandbox, the cat kept covering me up.

Witty jokes trigger humor and pride.  Witty jokes also trigger pride because they require insight to be understood.  Recognizing the insight elevates your rank to the comedian’s rank.  ~   President Bush is waging war for the sake of the environment. He hopes to drive the price of oil so high that we stop driving cars.

Puns trigger pride, but not humor.  Puns trigger pride because their play on words requires insight to identify.  However, they do not lower someone’s rank.  ~   I used to be a gold prospector, but it didn’t pan out.

Gossip triggers more humor than jokes or comedy.  People spend a few hours a day conversing recreationally and gossip dominates those conversations.  By comparison, people spend less than an hour a day listening to jokes or watching comedies.

Sports fans particularly enjoy upsets because they trigger pride and humor.  By winning, the underdogs trigger their vicarious pride.  By losing, the favorites trigger their humor. 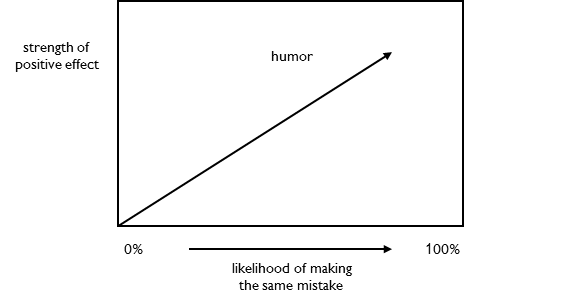 Humor varies with the likelihood of making the same mistake.  The more likely it is that you could make the same mistake, the stronger the positive effect.  Tabloid newspapers focus on famous actresses who are overweight or have a philandering husband because those are the mistakes tabloid readers are most likely to make.

Humor does not vary with the size of the other person’s rank reduction.  Unlike humiliation, humor is not stronger for larger rank reductions.  You feel the same positive effect when another person’s rank falls, regardless of how far it falls.  You prefer gossiping about a neighbor to gossiping about a famous person.  Although a famous person’s rank can fall further, you are more likely to make the mistakes a neighbor makes.  Tabloids focus on famous people because many readers know them, not because they have further to fall.

Humor seems stronger when it also stops envy.  If you envy somebody, it is more enjoyable to see them make a rank-reducing mistake.  Their mistake simultaneously triggers your humor and stops your envy.  This is the tall-poppy syndrome.  People prefer to criticize tall-poppies because it triggers humor and stops envy.  The most vocal critics of tall-poppies are their former peers, who feel the strongest envy.

People joke about or criticize others for making mistakes they worry about making.  The more somebody could make a particular rank-reducing mistake, the more they enjoy identifying others making that same mistake.  People on diets are the first to joke about others being fat.  People who have recently quit smoking are the most vocal critics of smoking.

​“ Georgia lives at the Yerkes National Primate Research Center in Atlanta, Georgia.  When she sees visitors approaching, she hurries to the tap to collect a mouthful of water.  She then mingles with the other chimps, and not even the best observer will spot anything unusual.  Georgia can wait for minutes with closed lips until the visitors come near, then there are shrieks and laughs as she sprays them. ”         Frans de Waal,  Suspicious Minds (NewScientist)
go to next chapter
back to Home
Happiness Dissected  is a more practical version of The Origin of Emotions.